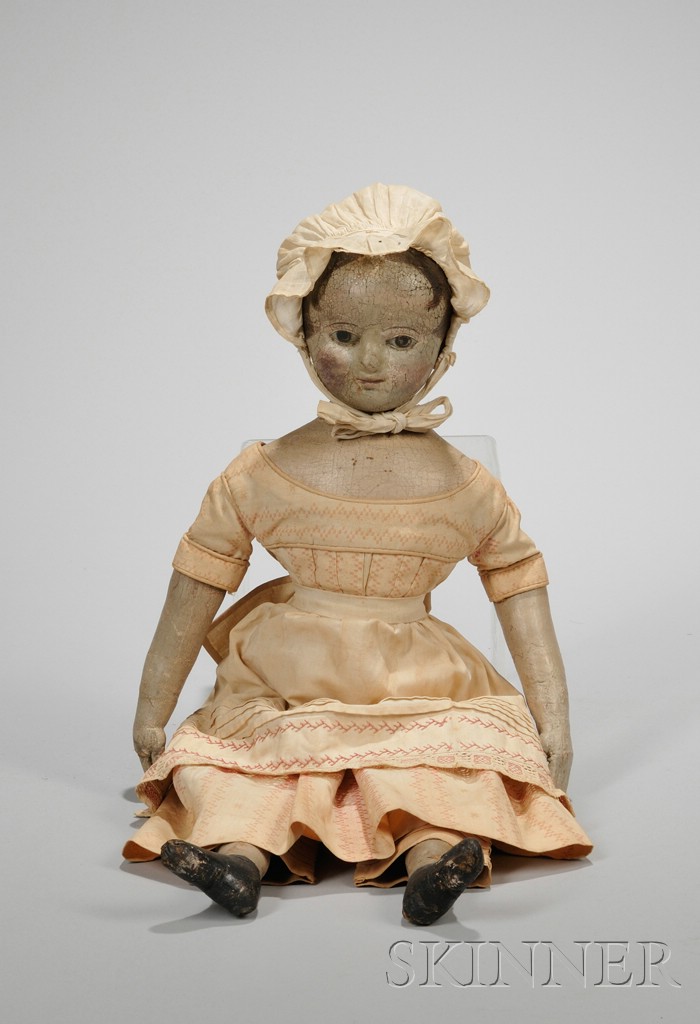 UPDATE:  This doll sold for $4,977, which I believe includes the premium.

Skinner Auctions auctioned an Izannah Walker Doll at their  Holiday Auction on December 15th and 16th in Marlborough, Massachusetts.   The doll is pictured above, with description below: 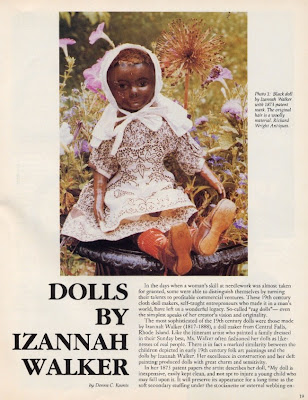 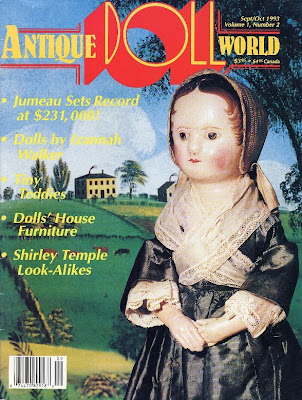 Article found in Vintage Cloth Doll Making Yahoo Group.
The closest account of Izannah's dollmaking that we have from her time is from Philomena Hart's column in the Providence Bulletin, as quoted by Janet Pagter Johl, on pages 37 - 39 of her book Your Dolls and Mine:

"Mrs. N.M.R. (Mrs. Norman H. Robertson, grand-niece of Miss Walker) wrote me a fascinating account of a doll which she thinks is the predecessor of the Chase doll of Pawtucket. It was made in Central Falls by Miss Izannah Walker.(1817-1888) She was the aunt of my correspondent who says of her, "Always inventive, she had created a stockinette doll as early as 1848 when my mother was a little child in New London, Conn. Family tradition tells of her struggle to perfect her work and of the long wrestling with one problem, how to obtain a resistant surface to the stockinette heads, arms, and legs, without cracking or peeling. With this problem on her mind, Aunt Izannah suddenly sat up in bed one night to hear a voice say "use paste." It worked... Aunt Izannah always deplored the fact that she was not a man. However, she made dolls and doll furniture, tinkered with household gadgets, designed a parlor heater, "that beat Ben Franklins," raised canaries, dabbled in real estate, and was looked upon with admiration by male contemporaries because of her skill with carpenters' tools, so perhaps she was resigned."


"The Walker family came to Central Falls in Somerset Mass., and the first dolls were made for friends. One, owned by the family and now out west, is one of the very earliest and is practically life sized. Izannah Walker had three sisters, and as the business began to develop she put them to work painting the dolls faces. There were also darky dolls made, but these Mrs. Robertson said, had wool hair instead of painted on hair. From 1845, when the first doll is said to have been made,until she died in 1886, Izannah Walker carried on the business, not securing a patent until persuaded to do so by friends in 1873."

Izannah Walker black dolls differ from her Caucasian  dolls in that the hair was not painted, but was applied wool to the top of the head.  Who knows where this wonderful black doll is now?  Collections shift and change often.   Here is a closeup of the magazine page:


Which brings me to my next gentle request.  It would be a joy to feature your original  antique Izannah Walker doll on the Izannah Walker Chronicles.   All copyright of pictures is retained by you.   You may offer pictures anonymously or publicly according to your comfort level.  Please contact me  using the button at the top of the page.


Thank you in advance for broadening
the knowledge of original Izannah Walker dolls.

Food for Thought: Other People's Questions 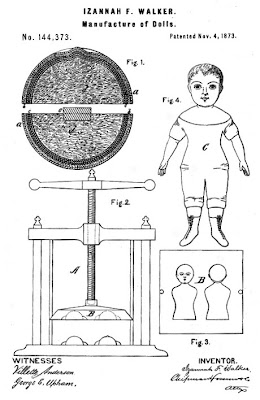 Mary Phillips Gonzales, BluFrogg Gardens posted the following questions and observations in an Izannah discussion online.  I asked her permission to post them here as food for thought.  She wrote:


Here's another thought for you: Izannah was born in 1817, right? It appears that she (they) were making the dolls by 1845. She would have been 28 or so. We all agree that it has taken each of us several to many years to replicate her doll, and we are probably still not doing it altogether authentically I won't go into detail here), so how long do you think it took her (them) and how many trial and error dolls would they have had to make?


I don't know about you all, but I have boxes full of "attempts."

I realize that children of that age were taught much needlecraft, but the making of the molds, the design of the body, the way the heads were sewn on the early dolls....the painting.......all before the age of 28?

Fast forward to Aunt Jane, Izannah's mother figure. When Aunt Jane Swazey died in 1872, Izannah immediately began the patenting process. Her patent picture depicts the entire process, hand press, molds, and all, and the written patent description describes the process, but then says, specifically, that the only thing she is requesting a letter patent for is the process of putting the cloth batting in between two layers of fabric, to allow the oil paint to be more flexible.

But if you only look at the drawing, you might think that Izannah is patenting the entire process...the hand press, the molds and so forth. But all of that  was already in common usage. Hawkins has a patent that also describes a press and molds, and that was 1868, and he wasn't patenting that either, just some other detail. You can't patent something in common useage, only that which is
new.

And then, when Izannah wrote her will, she willed this patent to her half brother David, not her sister Jane.

Just some thoughts to mull over. I have some wild speculations, but nothing more than a working knowledge of dollmaking and a dabbling in psychology to support it.

There are some really interesting implications here...did Izannah start with a body pattern designed by someone else?  Was the press mold process a common one at the time?   See Edyth O'Neill's pressed linen doll which is similar to a Hawkins doll as an example.  So was Izannah only patenting the padding over the pressed linen?  Hmmmmmmmm.  Interesting theory.
at December 04, 2010 1 comment: