While looking for some other information about Izannah Walker in Your Dolls and Mine by Janet Pagter Johl, I found an article written by Lila Horton Singsen laid into my extra copy of the book. I believe this copy came from a box lot of books I bought at Withington's at a 2010 auction. It was in October 2010 when the Velma "Dolly" Driscoll collection was sold.

The article had been ripped out of an issue of the now defunct print version of Antiques Journal. So I don't know what year this one page article was published, and couldn't find anything online. The article is page 38. Born in 1888, Lila Singsen passed away on November 5, 1963. So we know it was published before then. Perhaps someone in the doll collecting community knows.

While her article is not about Izannah Walker dolls per se, it is about dolls said to be made by Reuben Bates in the same manner. Included here is a scan of the original page of Lila Singsen's article, as well as a transcription. As a dollmaker, I found that they made a doll from Reuben's mold very interesting. 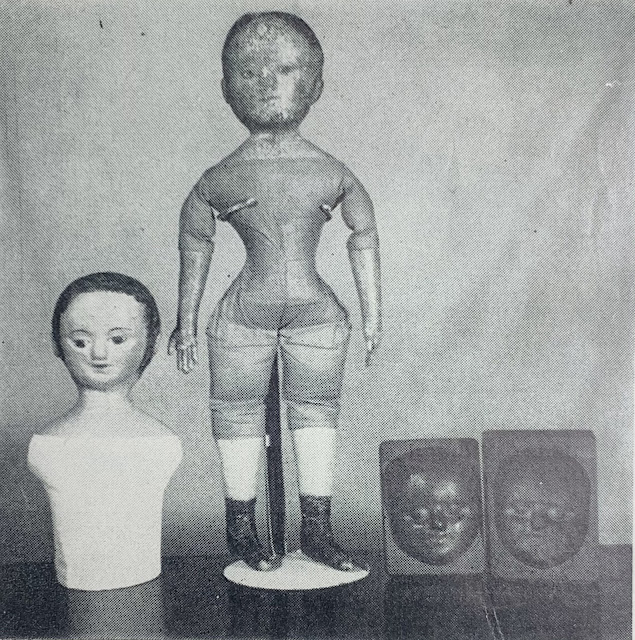 As I think most all collectors will agree, one of the fascinations of our hobby is trying to solve the mysteries surrounding some of our old dolls. Though I have followed many clues, the case of my Susey Bates is baffling. Not that I do not know her origin, because I do know where, approximately when and by whom she was made, but the mystery lies in the fact that up to now we have been unable to locate another like her, although many have been brought or sent me for comparison.

For those not familiar with Susey’s history as related briefly in Janet Johl’s “Your Dolls and Mine“, I will say that in most respect she is very similar to the Izannah Walker doll, much loved by us in New England, perhaps because of they are having been created here in Rhode Island in great numbers between the late 1840s and 70s.

I acquired Susey from a member of the Bates family, together with a very heavy iron mold from which her face was formed. Also I have the paper pattern from which the body was cut, (The old thin paper full of pin-pricks made by the slender pins of the period), and a sewed-up cloth body pattern put together with machine stitching.

According to old Providence Directories we find that during the 1850s, Reuben Harlow Neal Bates was a Pattern Maker employed by the Barstow Stove Company. He had nine children, the last born in 1856, and it has been suggested that he may have made the dolls only for his family and the children of his friends. However, this seems rather illogical since, in nearby Central Falls, Izannah Walker was producing the same type of doll probably very cheaply, and while they had no claim to beauty they were certainly more attractive than the Bates doll, whose left eye is definitely higher than the right, giving her face a one-sided look. At first I thought this effect might’ve been from the fault of the artist painting Suzy‘s features, but the mold proves otherwise.

This winter, a collector friend, Mrs. Margaret Elvin, and I decided to do a little experimenting to see what sort of a face we could produce with the old mold. We lined the hollow part with a paste-saturated buckram covering this with several layers of narrow strips of paper toweling, then pressed the other half of the mold into the wet mass allowing a couple of weeks for thorough drying. We had no mold for the back of the head but we formed one of sorts from a heavy aluminum foil, repeating the process used for the face.

When both were dry and firm we seamed the two parts together as in the original, then formed a neck and shoulders of heavy cotton cloth to which we attached the head. The hole was then stuffed with cotton batting (reinforced with a wooden dowel, as are all this type of doll.) Overall we stretched and pasted old white stocking material, painted it and the unbeautiful result may be seen in the accompanying illustration. Done by our method we both agreed that the time consumed as well as the result would hardly warrant the producing of this type of doll commercially, but we had fun doing it.

Until recently I thought there was another distinguishing feature of the Bates style, namely that the eyes are painted blue. I had never seen a Walker with anything but brown eyes. But just lately a friend offered me a doll which had just emerged from storage – – the old family doll. “It wouldn’t by any chance have blue eyes with it?”  I asked. The reply was that it had. “At last we have found a sister for Susey,” I thought. But alas no. When she appeared, she was, beyond a doubt, a blue-eyed Walker. It would be interesting to know if there were others so painted, scattered about the country.

In an effort to get to the bottom of this mystery, another possibility has occurred to me. Might it be that Izannah engaged Reuben to produce a mold for her. Being a departure from his regular business, did he, perhaps, come up with this one sided face which she would, of course, have refused to except. And did he then being a thrifty New Englander, undertake to do a little experimenting for himself, as my friend and I have just done, rather than throw away the initial mold he had put his time and skill into making? And did I Zana, commending his thrift, give him a pattern of the body she was putting on her own dolls? It does seem to be identical, even to the blue cambric covering. And did he, then produce a few dollars, just for his own children and for for those of the neighbors?

Probably we shall never know. Unless some of the readers of this article take a look at their Walker dolls, recognize the clues given and find they have a Bates, then we must conclude that the poor little Susey must resign herself to being without a relative in the world. On the other hand, perhaps there is a certain distinction in being a one-and-only. 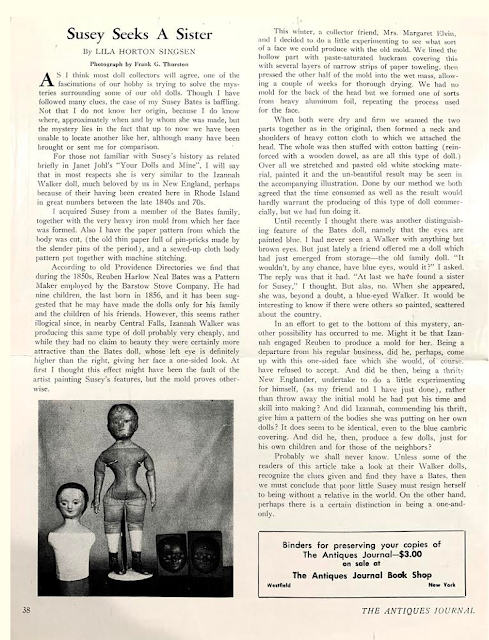