This blog began in 2008. This post was written on January 7th of that year. I thought it would be fun to re-post some of the early blog posts. When I began this blog, it was on a whim on New Year's Day. I thought it would be nice to create the online resource I wish existed. Since that time, social media sites have come to the forefront and blogs have taken a back seat. But there is something to taking a deep dive on a subject, and this blog represents 10 years of study.  I put the blog archive back into the sidebar so visitors can search through.  Wonderful images of Izannah Walker dolls have been provided by some wonderful people for the inspiration of modern dollmakers and those who collect Izannah Walker dolls.

This post about an imagined Izannah Walker journal was fun to write back in the day. 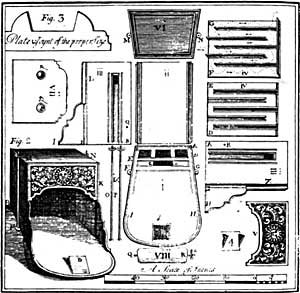 
It's interesting how these people go on and on about my dolls, as if that's the only thing I ever did. Well, I am proud of them, and it is amazing that 150 years later they are still going strong. I wonder what my nieces and nephews did with my molds and such? Wouldn't those go for a pretty penny in today's market?

What these people don't know is that I was not only a dollmaker - I was an inventor. The dolls grew out of the inventing. The phrases "what if" and "why" and "I wonder" were always rattling around in my head. And it seems like the answers to questions were often held outside of a woman's realm. But that didn't stop me, no sir.

And I'll grant you that while many men have marbles for brains there have been a few who had marvels for brains. Take old Ben Franklin, for instance. Now there was a man who thought like a woman! Asking the question "What if the fireplace were in the middle of the room?" is pure genius.

Back to the dolls...if the little girl down the street hadn't fallen on her china doll and broken it I might not have thought to make a different kind of doll. But she brought it down to me, jagged edges and all, saying "Miss Izannah, you're the smartest woman I know, ma'am. I bet you can fix this." And so I did. But it made me ask the question, "What if a doll had a hard middle and a top layer of batting and fabric?"
I bet a man thought up the idea of making a doll out of china...