There is not one word about Izannah Walker on the Central Falls, Rhode Island website. Central Falls had a large growth in population in the 1800's due to the increase of the textile industry. It makes sense that Izannah might have settled in an area where textiles were readily available for her dollmaking business. One of Central Fall's claims is that it has been recorded in Ripley's Believe It or Not for being the smallest most densely populated city in the nation. They do mention Elizabeth Buffum Chase, an abolitionist and conductor in the Underground Railroad. But no mention at all of Izannah Walker?
Posted by Dixie Redmond at Wednesday, January 30, 2008 2 comments

You Have Not Because You Ask Not Part 2

I know you're out there. You own an original Izannah Walker doll. What a joy! What a responsibility. What an opportunity!

Thank you to those who have already shared anonymously and publicly.
Posted by Dixie Redmond at Saturday, January 26, 2008 2 comments 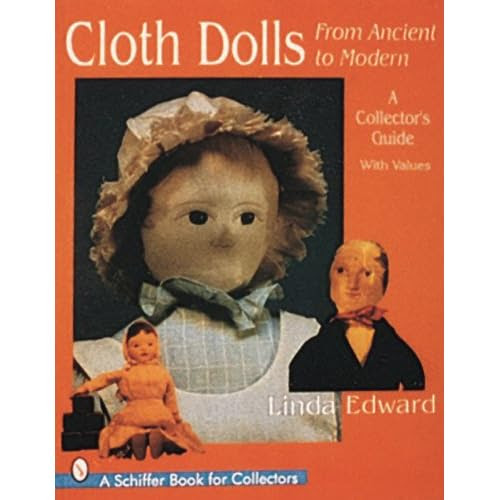 It struck me the other day that there are probably some key magazine articles and books about Izannah Walker Dolls. These are copyrighted but it would still be good to have a list of writings about Izannah Walker so people could know about them. Cloth Dolls Ancient to Modern by Linda Edward has some great information and wonderful pictures of original Izannah dolls. The link provided is to the author's site where you can purchase books autographed by her.

If you know of other good sources please let me know!
Posted by Dixie Redmond at Wednesday, January 23, 2008 2 comments

Hip Hip Hooray!
Izannah lovers are helping to develop a great list of museums and shops where original Izannah Walker dolls are available for a visit.

I have received two responses from museum curators that they will take pictures of their Izannah dolls for me to share with all of you Izannah Walker doll lovers. We will be very Thankful when that happens, won't we? ;-)
Posted by Dixie Redmond at Thursday, January 17, 2008 1 comments

Original Izannah Walker Doll "Thankful"
The Doll Museum at The Old Rectory
Oh, what fun to get up at 6 a.m. and see an e-mail from Denmark telling me of an Izannah doll in a museum for the Museum and Shop list. You can see that the list has been added in the right side-bar. Thank you, Lone Pierette, for giving me the beginnings of this list! Lone is a wonderful dollmaker and a great encourager. Keep those cards, letters and e-mails coming, everyone! Together we can put together a great list of where Izannah dolls are.

The beauty above can be seen at The Doll Museum at the Old Rectory which is located at 50 West New England Avenue in Worthington, Ohio. Their site says, "The museum features a distinguished collection of 19th and 20th century dolls including Parian bisques, French fashion models, milliner's models, French bebes and portrait dolls as well as American dolls by Ludwig Greiner, Izannah Walker, and Joel Ellis."

Oh, be still my heart!

The Shelburne Museum in Vermont
is another place where you can see an Izannah doll. The Museum reopens on May 18th.

Where Have All the Izannah Walkers Gone? 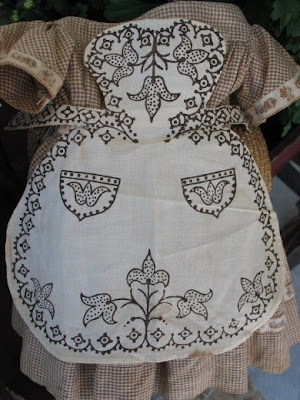 So far I know that the Wisconsin museum has one, and I believe the Shelburne Museum in Vermont has three...where are the others?
Posted by Dixie Redmond at Monday, January 14, 2008 3 comments

Each time I've made an Izannah inspired doll
I try to include some new element of the originals.
The dress above is an inspiration for me in dressmaking.

There are three rows of soutache braid on the dress.
I think the braid was once black, if the black velvet
sash is any indication of their color before fading.

Look at the pleats on the front bodice!

I lost the pictures of the back of the dress when my computer hard drive died. I'm so glad I had loaded these pictures onto Picturetrail before my crash. You can't see the black glass diminutive buttons that were sewn on. Recently I bought some on Ebay to use when I make a dress inspired by this one above.

But look what I just found on-line at the Wisconsin History Museum- what a dress and what a doll!

It's interesting in looking at the three Izannah dolls I've seen how the cloth body and shoulder plate area meet. I will refer to the dolls by their dress color - Pink Flowered Izannah, the Red Izannah and the Blue Izannah. To see more pictures of each doll, click on the thumbnails of them in the sidebar.

All three Izannah dolls had an under body and a second skin over the body. The body was fairly hard (cotton? horsehair?). It appeared that the head and shoulders was molded over the first body. But the shoulder attachment of the body to the shoulder plate was slightly different on each doll.
The Pink Flowered Izannah

In the Pink Flowered Izannah, the second skin was glued on top of the shoulder plate. There may have been stitching underneath, but of course I couldn't see that.

This was a fun doll to see because her face was different in shape than the first two. Also she seemed a bit more primitive overall. Her hands were less refined than the previous two dolls. You can't see it very well in the photographs, but you can almost seem stitching lines at the top of the head.

Another second skin glued on at the shoulder plate.

Look below at this picture - you can see a different colored body underneath to the left of the center stitching lines. I couldn't tell if this is a third repaired body covering or if the lighter cloth there is the original body covering.

Well, that's it. I'm hoping to intermingle observations about original Izannah dolls with what's going on in the Izannah Inspired World, so keep checking in.
Posted by Dixie Redmond at Sunday, January 06, 2008 0 comments

You Have Not Because You Ask Not

A couple of years ago there was a discussion on the Yahoo Vintage Cloth Dollmaking group about museums and shops to visit dealing in antique dolls. One of the members from Maine mentioned they had gone down to Lucy's Doll House in Camden, Maine. I decided to go down, and brought my camera along, just in case. I went in, looked around and at the doll and talked with the owners saying, "I represent a group that studies old dolls and was, um, wondering, um, if I could take pictures of the Izannah Walker doll you have?"

Said doll was in a glass case all locked up. But the owners are so gracious and allowed me to take a few pictures of this Izannah, which had recently been purchased at the Skinner auction. They took her outside where the light was really nice and sat her on a nice cart, draping her clothing underneath. I remember my hands were actually trembling because I saw the price tag on the doll. I took a few shots, trying to get good angles that dollmakers would appreciate.

Later in the year, a friend traveled down with me again to Camden. We visited the Izannah doll above, and then we went to lunch with the plan to go back and look again. All during the lunch I barely focused on my food and talked about how I would really love to be able to take pictures ofthe doll without clothes to see how she's constructed. I said to my friend, "It's said, "You have not because you ask not." So I determined that I would go back to the shop and ask if I could take pictures of the doll's construction. I was really, really nervous about asking.

Well, it did work out that I could take pictures of her construction details (Thank you, Sue!) If you click on the picture of this doll in the right sidebar you will see an album of detailed pictures of her.

Here's what I've learned from that experience. Sometimes something that you dream of is only a question away. And what if I had given into my fear that NO would be the answer? I wouldn't have been able to take those pictures. Other than family highlights, that has been one of the funnest moments of my life.
Posted by Dixie Redmond at Friday, January 04, 2008 1 comments

Black Folk Art Doll on right
The Blackberry Briar, Michelle Sylvia
Almost every dollmaker will get there. Someone will tell you about Izannah Walker and you will be struck by the beauty of her dolls. Or you will see a beautiful doll made by a modern dollmaker and find out it was inspired by Izannah Walker. The above dolls were made for a swap - aren't they gorgeous and wonderful foils for one another?
Posted by Dixie Redmond at Thursday, January 03, 2008 1 comments

I would like to include a list of commercially available patterns that are appropriate for a new dollmaker to make an Izannah inspired doll. If you have used a pattern that has worked well in making an Izzy, please email me.

I'm developing a pattern based on my visits with three original Izannah Walker dolls at Lucy's Doll House in Camden, Maine (see photo links to the right). I want to do a great job with this (like Claire Pruitt does with her patterns!) so it will probably be April or May before this is ready. In the meantime, Annie Beez has many patterns that have that wonderful hourglass shape that works well for torsos. Annie Beez' Mae pattern is what I used for my first Izannah inspired doll.

Also, I am putting together a list of links to modern dollmaker's Izannah inspired creations. I have a beginning - but need help. If you would like to submit a link to a picture or an online album of your Izannah inspired creations, please email me the link and be sure to include your name in the e-mail.
Posted by Dixie Redmond at Wednesday, January 02, 2008 0 comments

This is a new venture on the first day of the first year for me, Dixie Redmond. I hope to put links here to all the Izannah sites out there - pictures and writings - for dollmakers and Izannah lovers everywhere. Happy New Year, Izannah!
Posted by Dixie Redmond at Tuesday, January 01, 2008 5 comments