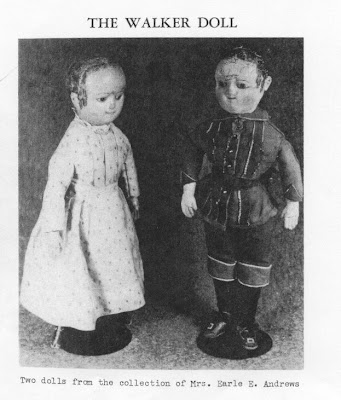 I tried finding more information about the Doll Collectors of America, and found the following information at Connie & Jaye Lowe's site:

"The first organized group of doll collectors was incorporated in 1936 as the Doll Collectors of America. Meeting monthly in the Boston area, these stalwart women recognized the historical significance of dolls and, being dedicated to research and education, mandated for themselves publication on a regular basis. Their early works, The Doll Collectors' Manuals, long out of print, are even today prized for their valuable content. The thirst for research and knowledge of their collections, many of which were family dolls, treasured and left by their mothers and grandmothers, led pioneer scholars/collectors such as Janet Johl, Eleanor St. George, and later the Coleman family to produce serious publications. The 1968 Coleman Encyclopedia of Dolls, and the companion 1986 Volume 2, remain the backbone of research. The hobby had reached such proportions that by the 1970s myriad price guides were being published. Today, the most widely used is the Blue Book by Jan Foulke."

I own a number of books from the mid 1900's which were published by the DCA, the latest I own being the 1983 Annual.  I wonder if this event will be covered by one of the major doll magazines.  I hope so!  That would certainly fit in well with the past focus of DCA's  pioneering of doll studies.