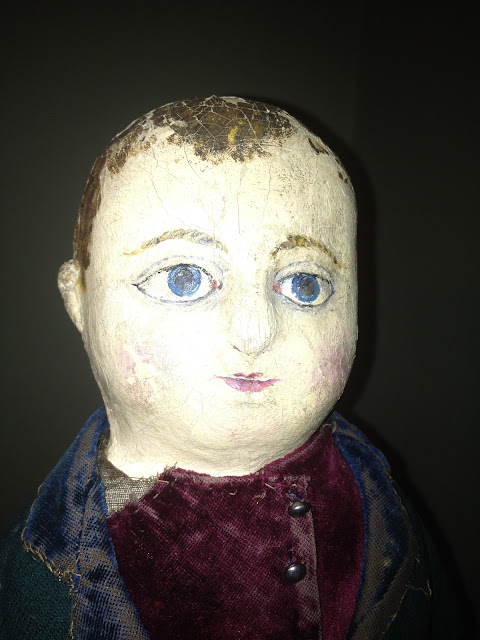 I saw this doll in pictures from a UFDC conference from a couple of years ago.  I asked the photographers if they knew who owned the doll, and they said no. I really wanted to know!  Imagine my delight when Laurel Parker put me in touch with the owner of this doll recently!  Laurel sent my contact information to Rebecca Hawkins, a collector in the south.  I thanked Laurel kindly and went on my way.  I've learned not everyone wants to share their original Izannah Walker dolls on the internet.

But I did hear back!   Rebecca called me on the phone and told me all about her Izannah Walker boy doll, and how he came to her.  He won  We had such a fun time discussing old dolls in gereral and Izannah Walker dolls in particular.  When I asked if I could share images here on the Chronicles, Rebecca said, "Oh, yes!  I believe in sharing and learning."   Oh yes!  I believe in that, too!

When Becky sent the pictures by email  I said out loud, "The Izannah Gods are smiling on me today."  And my teen son said, "Mom, you are so weird.  You know there are no Izannah gods, right?"   Ha ha!

So without further ado, here are the images Rebecca took of her antique Izannah Walker boy doll.   Rebecca purchased this 17" doll from Tennessee.  It reminded me of a doll I saw in person at Richard Wright's auction collection.  There is a similarity in shape and feeling.  And he also brings to mind Paula Walton's doll, seen in this post, which was also shown in the book American Rag Dolls, Straight From the Heart on p. 21.  Doll makers know that you try new things with each creation.  Sometimes the new attempts work and sometimes they don't.  Which is why you can see some variations in these old folk art dolls. 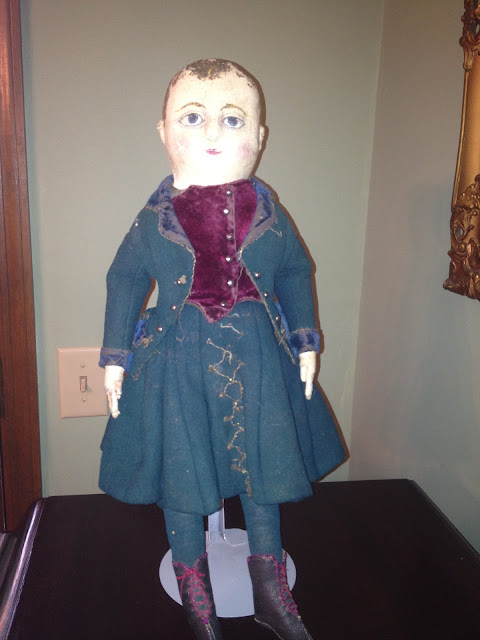 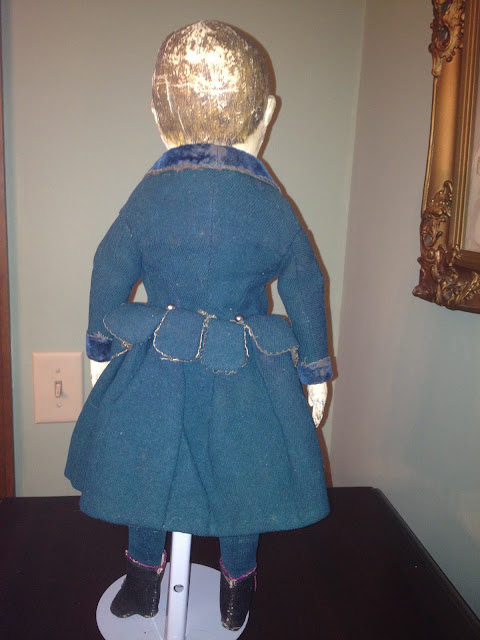 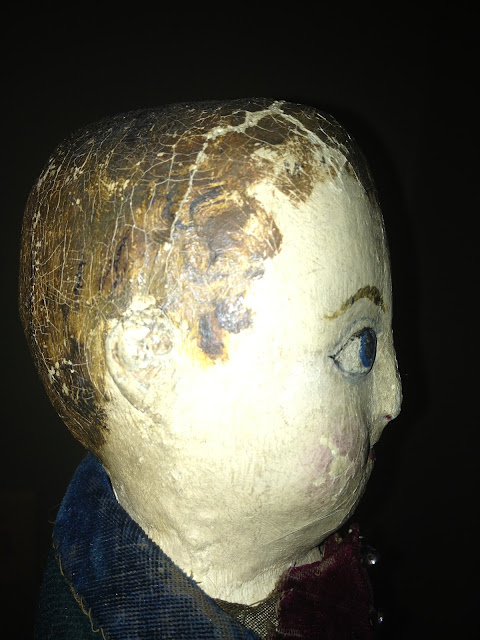 I asked Rebecca some questions about body construction.   She said she had never removed his clothing, but did so that we could see his body construction.   Usually in pre-patent Izannah dolls, the body covering comes up over the cloth shoulderplate.  Some post-patent dolls have a shoulder plate that is attached.   You can see an image here of a post-patent doll's shoulder plate.  Rebecca'sdoll's shoulderplate is shown below: 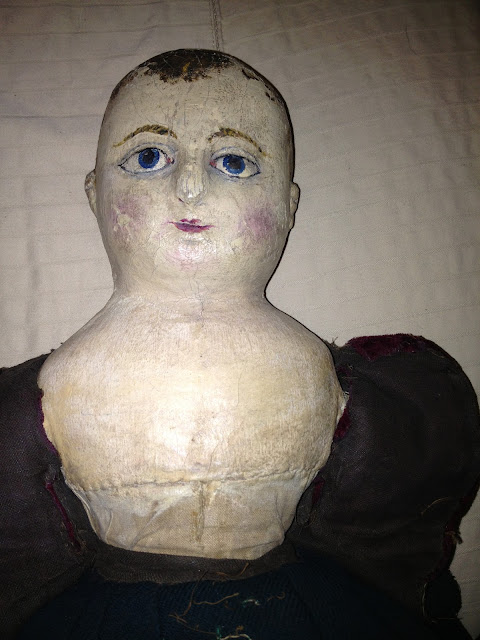 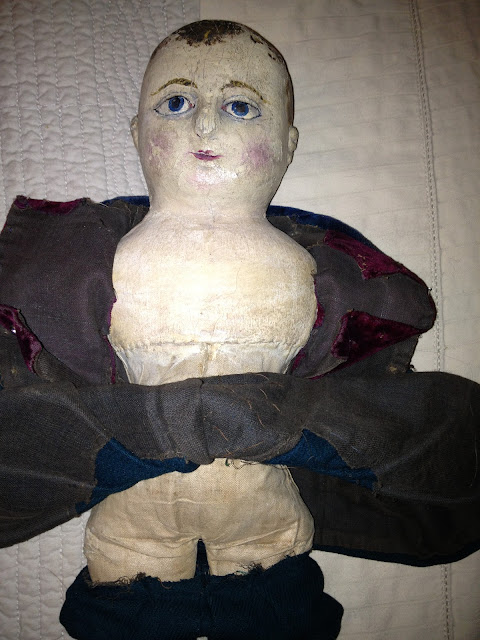 Here is the top of the head: 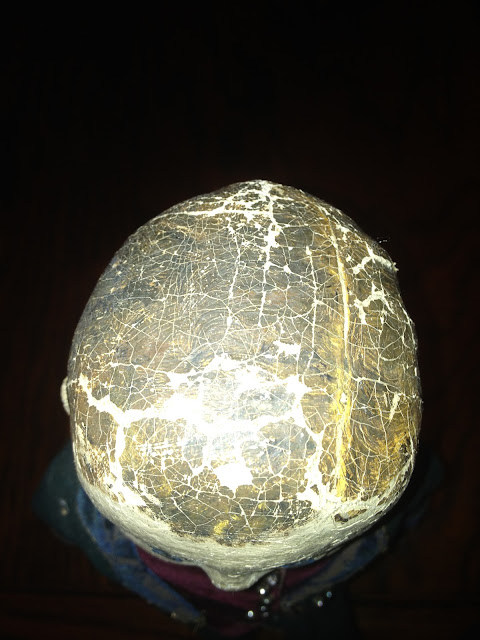 The back of the head and neck: 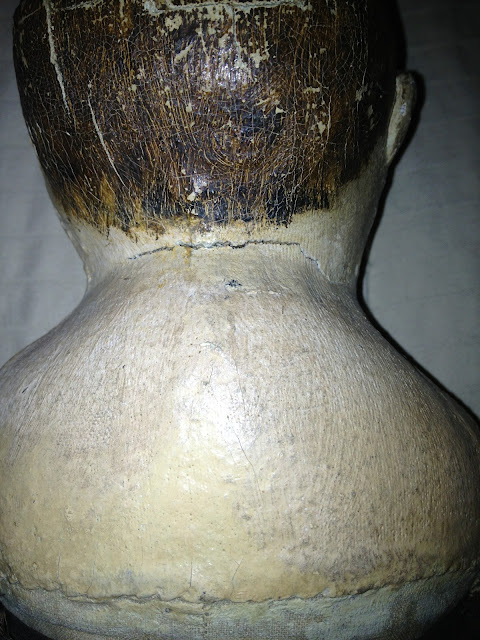 Some marvelous boots, which Rebecca has never removed.
I wonder if he is barefoot underneath those boots,
or if he has painted boots underneath? 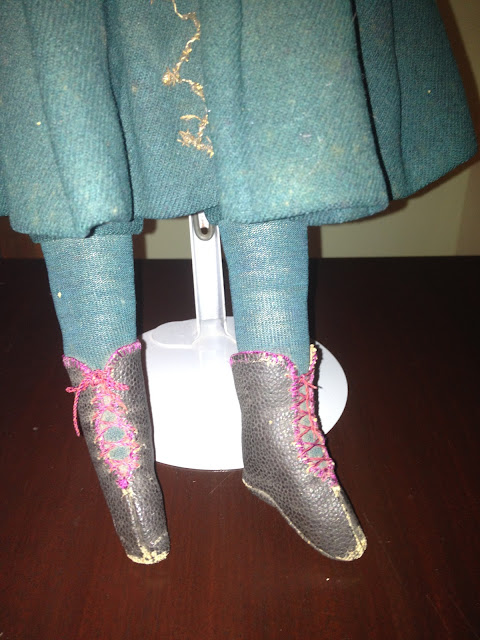 And here he is again, in all his earnestness.

Thanks so much to Rebecca Hawkins for sharing her antique Izannah Walker boy doll.
Folk art appreciators appreciate it!