This past weekend I (Dixie) gave a Zoom presentation about Izannah Walker dolls for a doll club. Reviewing past studies of Izannah Walker dolls kicks up particular questions. In researching I skimmed the History of the Town of Somerset, Massachusetts, which you can read at the following link:

What a world we live in where fragile historical records and old books can be digitized to be read by so many people!

There isn't mention of the Hintz family, or of Izannah or Jane in this book, but it gives background of the place where they lived. The town was in a boom of industry during the time that Jane and Izannah Walker lived there as girls. Textile mills were being built along the river, the pottery industry was booming, there were said to be up to 10 shipyards on the river near to the town, as well as some actually IN the town.  There was a stoveworks.  All of these industries might have given both Jane and Izannah first hand views of some components which would later be used in making dolls.

We know Jane Walker made dolls, but there are so many questions which come of this.  We don't know that she made dolls which were similar to the dolls known to be Izannah Walker dolls. Was she making dolls under the auspices of the "Celebrated Miss Walker Dolls" described in the advertisement?  Were her dolls made to be sold through the dolls Izannah made and were marketed by wholesaler E W. Billings which was discovered by Kathy Duncan?  Or did Jane Walker sell them directly on her own in her own town?

A search for more information on Jane Walker led me to an old post here on the Izannah Walker Chronicles, with a comment made by Monica Bessette: https://www.izannahwalkerchronicles.com/2008/11/izannahs-girlhood-home.html 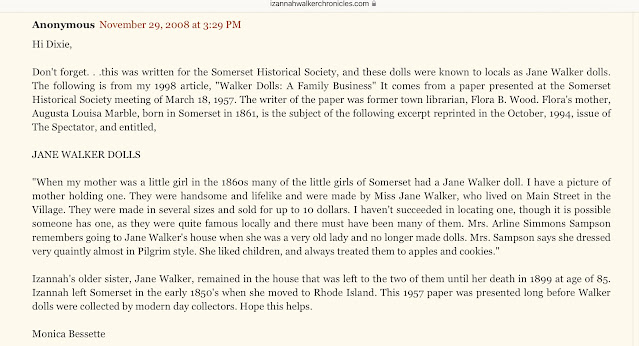 Monica's comment is shown in the image above and restated here:

Hi Dixie,Don't forget. . .this was written for the Somerset Historical Society, and these dolls were known to locals as Jane Walker dolls. The following is from my 1998 article, "Walker Dolls: A Family Business" It comes from a paper presented at the Somerset Historical Society meeting of March 18, 1957. The writer of the paper was former town librarian, Flora B. Wood. Flora's mother, Augusta Louisa Marble, born in Somerset in 1861, is the subject of the following excerpt reprinted in the October, 1994, issue of The Spectator, and entitled,JANE WALKER DOLLS"When my mother was a little girl in the 1860s many of the little girls of Somerset had a Jane Walker doll. I have a picture of mother holding one. They were handsome and lifelike and were made by Miss Jane Walker, who lived on Main Street in the Village. They were made in several sizes and sold for up to 10 dollars. I haven't succeeded in locating one, though it is possible someone has one, as they were quite famous locally and there must have been many of them. Mrs. Arline Simmons Sampson remembers going to Jane Walker's house when she was a very old lady and no longer made dolls. Mrs. Sampson says she dressed very quaintly almost in Pilgrim style. She liked children, and always treated them to apples and cookies." Izannah's older sister, Jane Walker, remained in the house that was left to the two of them until her death in 1899 at age of 85. Izannah left Somerset in the early 1850's when she moved to Rhode Island. This 1957 paper was presented long before Walker dolls were collected by modern day collectors. Hope this helps.Monica Bessette

Records which used to be on microfiche are being digitized and made searchable today.  We can expect that people like Monica Bessette and Kathy Duncan might uncover information which previously required in person research.  That is a great development!

If you have not read Monica's articles they are well worth reading!

“One Collector’s Vision Unearths a Unique Doll from the Past,” Monica Bessette, Antique DOLL Collector, May, 2020, pp. 36-41.

“The Doll of Her Heart: The Story of Alice Kent Trimpey,” Monica Bessette, Antique DOLL Collector, July/August, 2019, pp. 60-65 (inspired by Tillie, an Izannah in Wisconsin).