Where are Reuben Bates' molds? 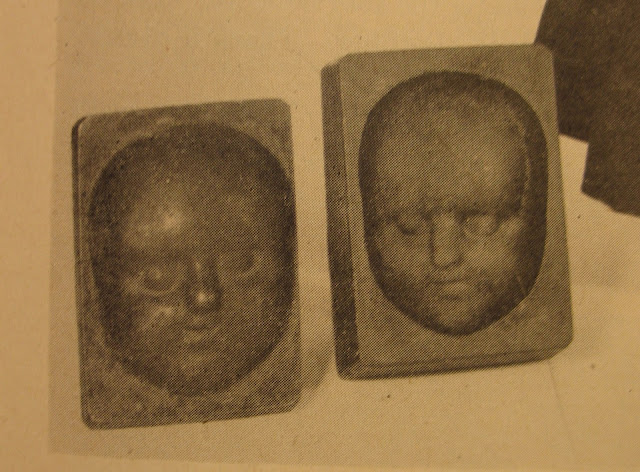 "Hey!" you say, "This site is about Izannah Walker, so why are you talking about Reuben Bates?"

Well, dear reader, here is why. I was reading in Janet Johl's 1952 book Your Dolls and Mine, and again saw the picture of a "Reuben Bates" doll and the iron molds used to make it on P. 39, above. Some time ago the members of the Izannah Walker Dolls group (now on Maida Today) were wondering what the connection between Reuben Bates and Izannah might have been. The Reuben Bates doll looks remarkably like an Iznanah Walker doll. 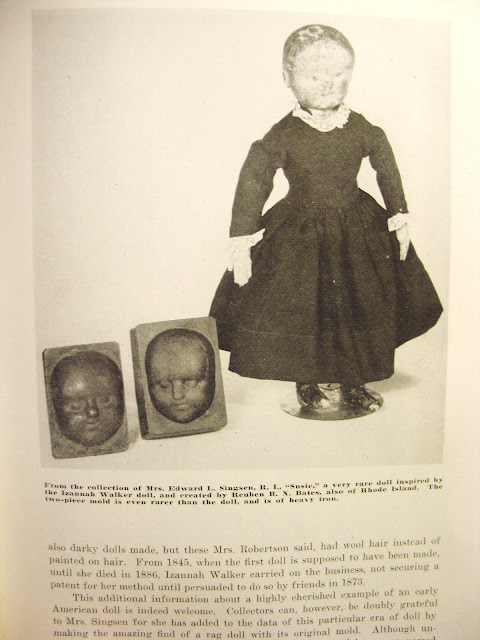 Last year I did a little sleuthing on Ancestry.com to find out more about Reuben Bates, and found him living in Providence, Rhode Island in the 1850, 1860, 1870 and 1880 censuses. He was listed as a "pattern maker" which may translate to mean mold maker.

The often quoted Providence Bulletin written by Philomena Hart quotes a Mrs. N. M. R. who was a neice of Izannah's saying that "Izannah designed a parlor stove that beat Ben Franklin's." It can be assumed that Izannah did not have an iron works in her back yard, and that in designing a parlor stove may have visited an iron works or stove manufacturing company. Could it possibly have been the Barstow Stove Manufacturing Company where Reuben Harlow Neal Bates was employed?

Here is what is written about Reuben Harlow Neal Bates' molds and dolls in Your Dolls and Mine by Janet Johl:

"This additional information about a highly cherished example of an early American doll is indeed welcome. Collectors can, however, be doubly grateful to Mrs. Singsen for she has added to the data of this particular era of doll by making the amazing find of a rag doll with its original mold. Although undoubtedly inspired by Izannah Wlaker, this doll was created by a man named Reuben Harlow Neal Bates who was born in 1802 in Attleboro, Massachusetts. He was a pattern maker all his life residing for a number of years in Providence, Rhode Island probably about 1840 until his death. He was employed by the Barstow Stove Manufacturing Company and it may have been during hs work there that he developed the mold from which the "Bates" doll was made.

This mold is most unusual and interesting for it is of iron and therefore very heavy. One half, fitting down firmly and tightly on to the other, pressed the features and head into the desired shapes.

Izannah Walker commenced making her cloth dolls in 1840 and the similarity in type is what makes one believe that Reuben Bates had her dolls in mind when he made his own mold. So far as is known his dolls were never offered for sale. Perhaps they were made for his own large family, or for his friends.

"The body of this most interesting specimen," writes Mrs. Singsen, "is well made and is covered with blue cloth. The pattern for the body was in the possession of the lady from whom the doll was obtained as well as the mold, her husband having been a descendant of Reuben Bates, but at the moment she could not locate it. In the photogrpah, the mold to the right, is of rouse, the hollow part. Note also that the doll's mouth is slightly crooked and that one eye is higher than the other."

One wonders how many of the Bates dolls are out there and are identified as Izannah Walker dolls? These are the kinds of mysteries that may never be solved but are interesting to try to solve. Could Reuben's mold have been the first trial mold taken for Izannah? Or did he see an Izannah doll and try to copy it? Is this why Izannah felt she needed to get her patent? When I was talking with my husband about this he said, "Maybe Izannah WAS Reuben Bates." He's such a jokester.

All of these questions bring up the question of WHERE are Reuben H. Neal Bates' iron molds.? They were last written about by Janet Johl and documented by photograph in her 1952 book Your Dolls and Mine as being owned by Lila Singsen (aka Mrs. Edward Singsen), who was a noted doll collector of the time. This is why keeping track of where the antique dolls have been is important - it sometimes gives clues to present mysteries to be solved. I bet some of you out there should look in your basement for some iron molds.
at June 25, 2010